Brown Apple Secret- How to Keep Apples From Browning-Science Project on Apple Browning.

Hi all! It almost three months into this school year. Maybe in the next few weeks, most of us will be exploring for a winning science project. This is one winning science project that I wanted to share with you. This is one of the best science projects yet! As we know it is fall and a wonderful season for picking apples. I thought about what wouldn’t be more fit than to experiment with apples. Have you ever sliced an apple and forgot about it? When you come back later, you see it turning brown. In this blog post, we will look at the science behind apples turning brown. Are you ready to dive into the deep science of the brown apple secret? Come on let’s go!

However, we try our best to keep apple slices fresh and juicy. There are times when apple slices turn brown. Most have experienced when we leave apple slices out for too long they turn mushy and brown. We don’t have an appetite to eat an apple like that. So, this science project is all about why an apple turns brown and how to keep the apple from browning? and which environment(pH) will prevent the apple from turning brown.

How to Keep Apple From Browning? and Why Does an Apple Turn Brown?

Most of the days, the apple slices in my lunch box turned brown. I always wondered how to keep the apple slices fresh and juicy. Soon my fourth-grade science fair was announced. So, I decided to work on this topic which was interesting and applicable in our daily culinary hacks.

How Does an Apple Turn Brown?

When an apple is cut oxygen seeps into the apple’s injured plant tissues. The oxygen reacts with the enzyme polyphenol oxidase (PPO ) found in the chloroplasts of apple tissue. The oxygen from air starts to furiously oxidize the phenolic compounds (PPO) in apple’s tissues. The PPO enzyme is oxidized to the o-quinones compound. These o-quinone compounds are precursors to the brown-coloured secondary products(browned apple). Further, the o-quinones generate the browning effect as they form amino acids or proteins (or they clump together to form polymers). These polymers or amino acid is the reason why an apple turns brown.

How to Keep Apple From Browning? Science Project on Apple Browning

In this experiment, we will be testing which liquid or fluid will prevent an apple from turning brown. The experiment will also give a detailed analysis on which fluid was the best to stop apple browning and keep it fresh for the maximum time duration. Before I started to work on the project, I came up with a hypothesis.

What Was My Hypothesis to Stop Apple from Turning Brown?

After which I started to collect the materials required for the experiment. You might want to use different ingredients than mentioned below.

What are the Materials We Need for the Apple Browning Project?

How to do the Apple Browning Project 0r Science Experiment?

Step 2: pour the prepared solutions into clear plastic cups and label them

Step 3: Cut the apples into slices

Step 4: Allow the slices to sit in the solutions for 30 minutes. Have a control apple slice not soaked in any liquid.

Step 6: Remove the apple slices and let it rest on the aluminium foil and label it. (take pictures with the time)

Step 7: Observe and take pictures of the apple(with time) slices every 1 hour and you can also extend to every 3 hours.

Step 8: All the data(brown, light brown, dark brown, no change in color) in color change with time has to be documented in the table (as shown below).

Step 9: Continue to document the data on the apple slice and its color change for 6- 8 hours. 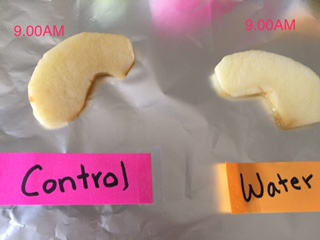 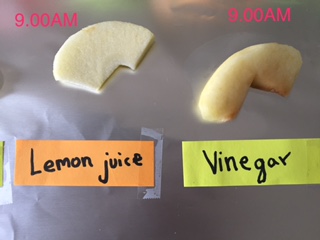 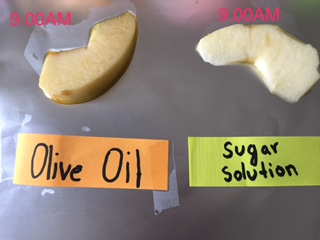 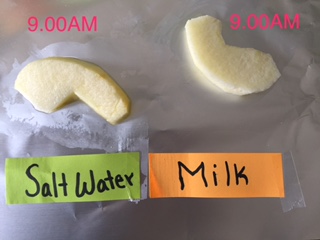 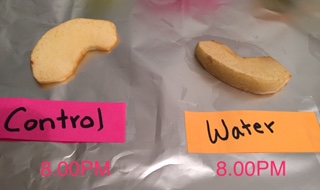 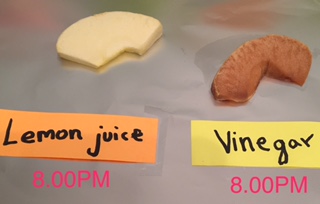 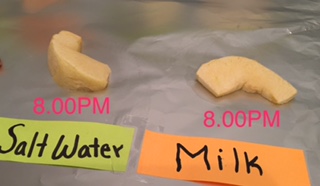 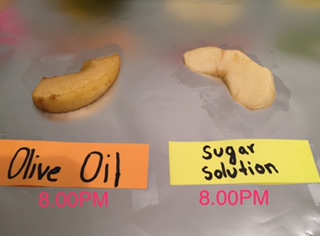 Review on How Apple Turned Brown

Before we continue, let’s review what happens, when an apple turns brown.

The science behind apple browning: There is an enzyme called Polyphenol oxidase(PPO) in apples. Once we cut or slice an apple, we are opening up some of the cells inside it. This enzyme reacts with the oxygen in the air and this reaction turns the apple slices brown, forming pigments called Melanin( amino acid). The reactions happen best at warm temperatures and when pH is between 3.0 and 7.0.

Which is the Best Fluid or Liquid that Prevents Apple from Turning Brown?

Now that we reviewed the apple oxidation. Let’s continue with our results. Down below, you will find the experiment and its results. Yours might be a little different from mine. The table above that shows the results may also be helpful.

Control: The enzymatic browning happened in Apple slices exposed to air. The apple slices turned brown in the experiment.

Sugar Solution: The enzymatic browning or PPO oxidation stops or prevented when sugar solution coats the freshly cut apple slices. The apple slices were less brown in the experiment.

Olive oil: Olive oil will not prevent browning in the apple as it is less acidic. The apple slices turned brown in the experiment with Olive oil.

White Vinegar: White Vinegar is acidic like lemon juice but the PH is 2.4 and above. It will not stop enzymatic browning in apple slices. The apple slices turn dark brown in the experiment.

Why Does Some Apple Variety Turn Brown Faster than Others?

There is one big question which needs an answer in this science experiment. Why does some apple variety turn brown faster than others? All the apples contain PPO, but the level of the activity is different between one apple to another. It may depend on the growing condition or the place it is grown. It also may depend on the area in which you place your apple. There are many variables to consider and judge. An apple may turn brown for many reasons.

My conclusion is the apple slices soaked in lemon juice is the best to stop apple from turning brown. While other liquid-like Sugar solutions, Salt solution, Water, Milk were able to prevent browning to a limit but not as good as lemon juice ( pH of 2 and is acidic). My hypothesis was wrong. Water is not good at stopping apple slices from turning brown but lemon juice is acidic and prevents apples from browning. You can try this experiment with a different liquid. This experiment is also prefect for virtual learning or homeschool. You can experiment at home and share the pictures and results virtually with your class. Aww! We ended so soon! Well, see you next time!

Hi again! Were you tricked? Fortunately, this is my 4th-grade science experiment which, won my first prize. I hope you enjoyed the article. Hopefully, this experiment will help you sneak a peek into the vast world of science. Hey, maybe you will also find some interesting facts. I just wanted to share my experiment with you because I found it fascinating when my hypothesis turned wrong and found new results to support the project. Have a glorious day and see you next time! Bye!

What is Slime Science? Magic Recipe for a Perfect Slime

Is Zero a Number?

Mystery of Pythagoras theorem-Facts and Proof